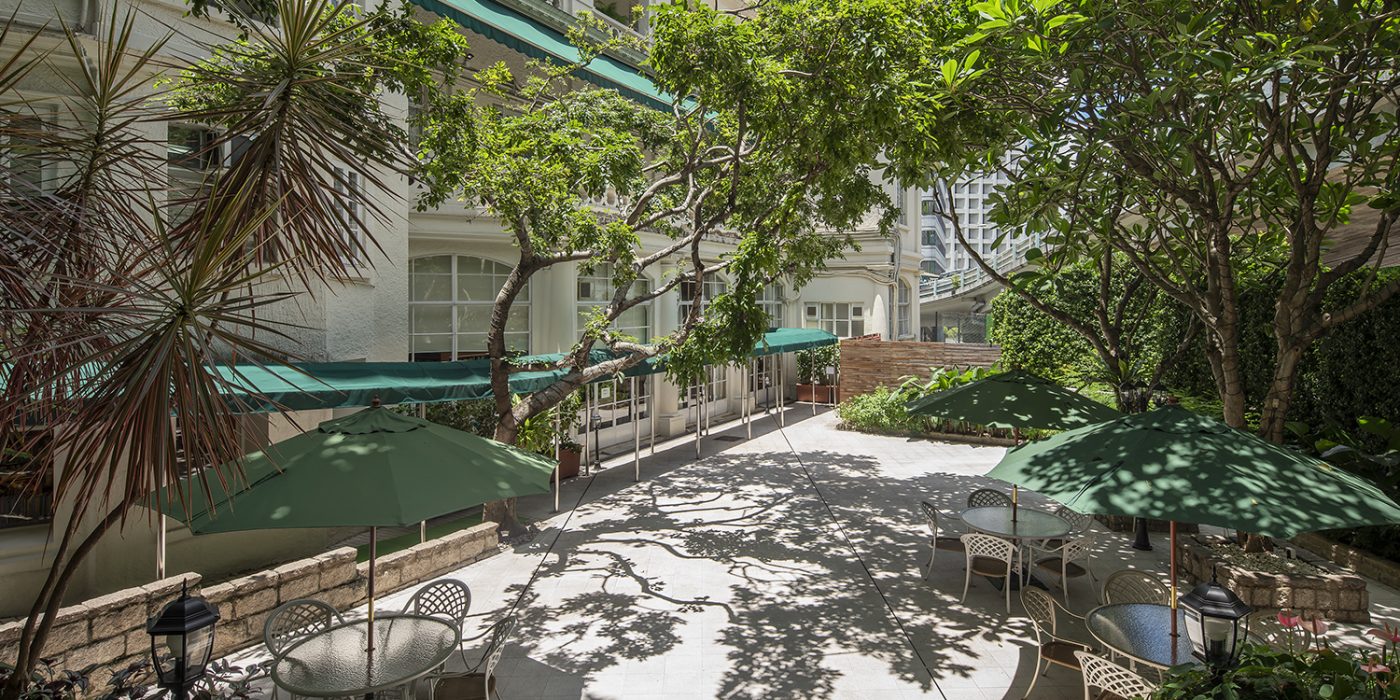 Reading in The Garden

Perhaps it was finishing reading Frances Hodgson Burnett’s The Secret Garden last month with my daughter that inspired me but I have found myself inventing excuses to spend more and more of my time enjoying our newly landscaped garden. The weather has finally cooled and on the last few Saturdays I have enjoyed the privilege of taking a break from the working week in what has felt like my own private garden, enjoying the newspapers and library new editions under the shade of an umbrella. Surprisingly, for the most part, my only company has been the library cat and, very occasionally, my daughter. It has felt like a secret oasis.

For many of us living in Hong Kong, spending time in a private garden is something to be cherished. With our tiny flats and postage sized balconies (for those of us lucky enough to have a balcony at all), a garden is a luxury we can only enjoy on visits to friends and family overseas. At The Helena May we are privileged to have our own beautiful garden to enjoy at our leisure and, unlike Mary Lennox and Colin Craven, we need not first find a hidden door beneath the ivy to access it. So as much as I have enjoyed my solitude, I am letting you in on my secret. Please come outside and enjoy the garden. The weather is lovely and the librarian will even let you take your books outside to read, just be sure to check them out first.

Now if only I could arrange for the dining room to bring me down a regular afternoon gin and tonic! 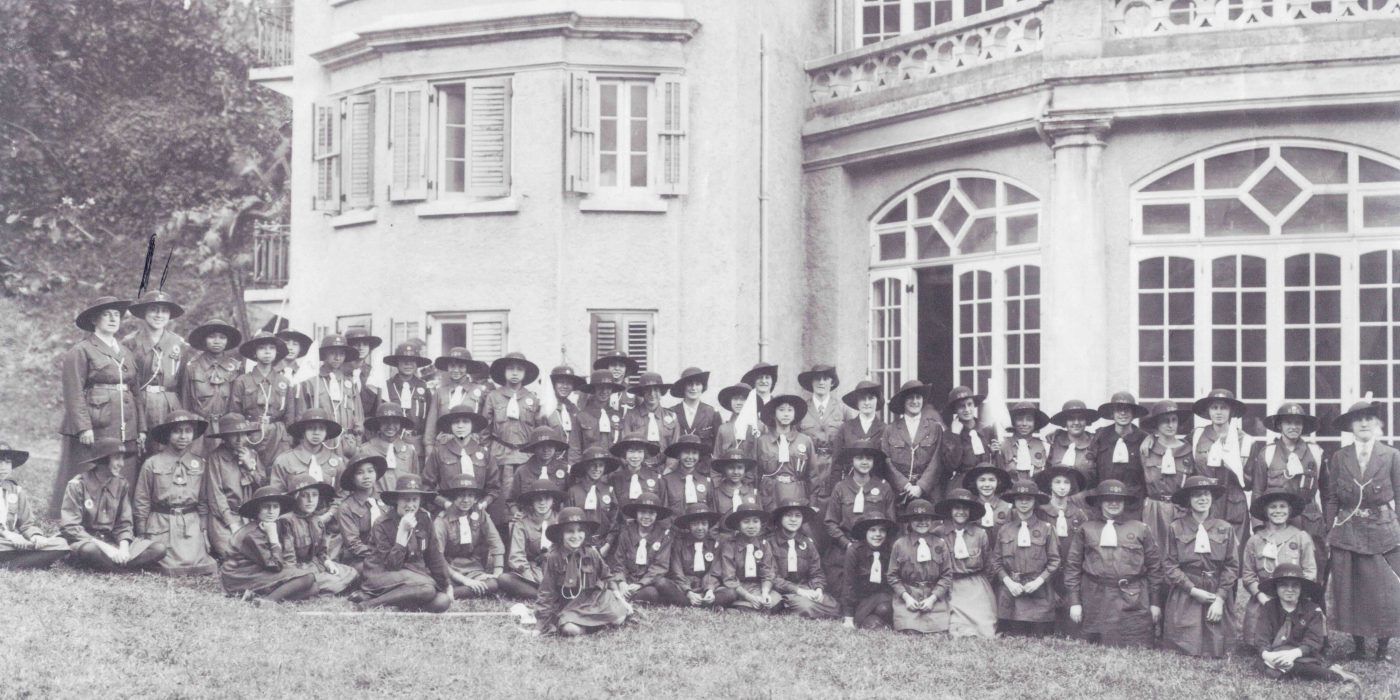 Dramatic Changes to The Helena May Main Building in 1920s

Two significant extensions to the building were added in the 1920s.  The first was begun in 1921, a mere 5 years after The Helena May opened.  Financially the 20s were a time of boom.  Hong Kong was doing well and The Helena May was also thriving.  More women were coming to the colony to work and taking up accommodation as residential members.  Subscriber membership was also flourishing.  By 1929 there were 455 subscriber members with 70 of them having joined that year.  More members meant that increased facilities were needed.  And the Council was quick to respond.

The building was originally symmetrical.  The additions to the Main Building were placed at the back while the front, facing Garden Road, stayed the same. The work, which began in 1921, was by far the most ambitious and was completed by June 1922.   A five-story extension was added on the left side of the building.  It included two spacious bedrooms on the top two floors, with a room for a library (our present Green Room) at the ground floor level.  The basement and sub-basement levels housed staff quarters and the kitchen respectively.

Another practical innovation was the enclosing of the lower floor with large doors and windows.  Today this lower floor houses the Library and the Garden Room.  The Helena May was rightly proud of these additions to the building and a grand opening was held, to which reporters from the local newspapers were invited.   The report in the South China Morning Post, on 22 June 1922 stated, “The most striking feature of the innovations is the conversion into a spacious dining hall of the large and formerly open basement.  The dining hall has been fitted up specially with electric power for cinematographic purposes and it is proposed to use the hall for lectures and other forms of entertainment.”

By 1929 a further addition to the building was needed.  This extension was more modest.  A two-story extension was constructed on the right side of the building.  This extension contained an office, with a veranda for the Secretary, on the ground floor.  This is the location of our present office but the veranda was enclosed in the 1950s to give more office space.  The new room on the lower level was designated as a meeting room.  This is where the bathrooms, off the Garden Room, are located today.

Over the years there have been other changes to the building but nothing so significant as in the 1920s.

Member of The Helena  May History Group 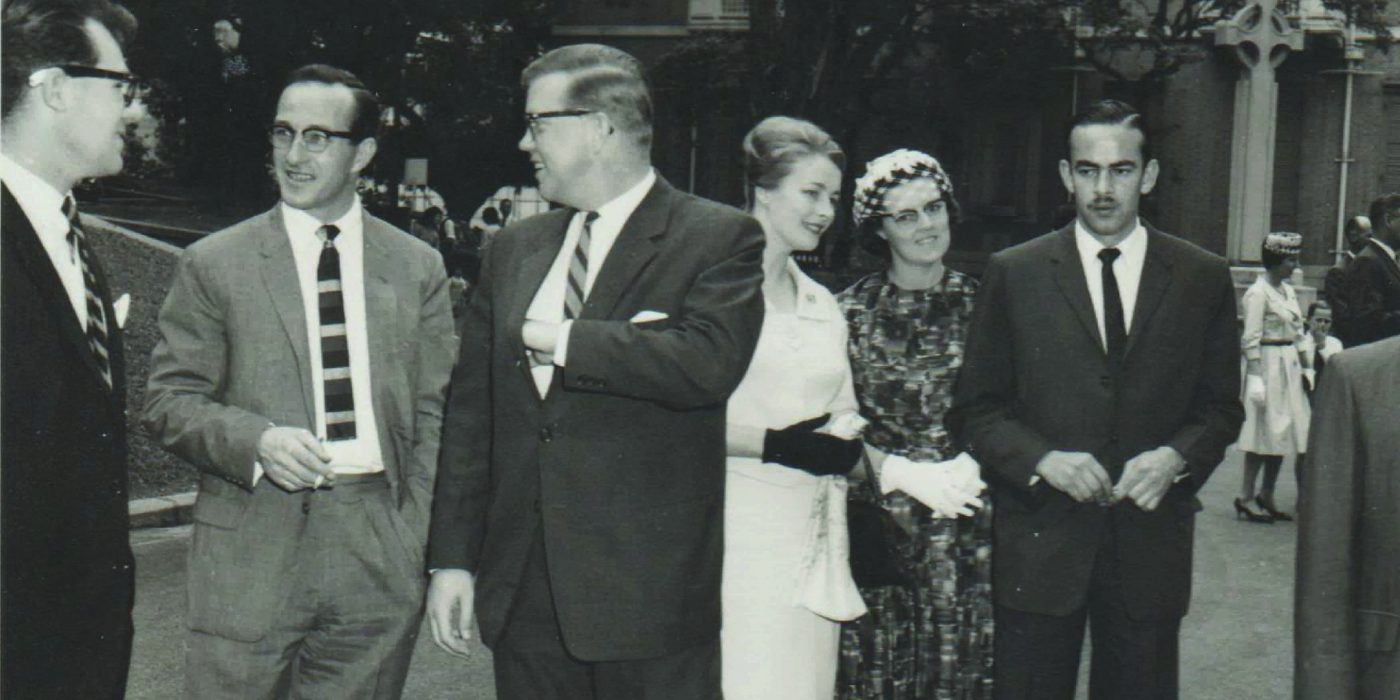 A Three-Term Chair and a Game-changer

The Helena May History Group is always delighted to hear from past members of the Club.  Recently we had a very interesting email from the son of one of our past Chairs, Mrs Margaret Moore.  Andrew Moore told us that his mother will celebrate her 90th birthday in July 2019.

Margaret Moore was Chair of The Helena May three times.  Her first term of office, from 13 Nov 1968 to 11 Mar 1970, coincided with very difficult years in Hong Kong’s history.   The Cultural Revolution in China meant political unrest in Hong Kong.  The Helena May residents would watch from their balconies as the communist protesters made their way up Garden Road to Government House to demonstrate against British rule.  A number of families left Hong Kong during this time and at one point subscriber membership was as low as 123 members.  Today we have over 1,000 members.  Residential members also left.  Many were young girls and they were recalled to their home countries by their families who feared they may be in danger.  Residential members were down to about 20.   To save money only two amahs were retained out of the usual five.   In 1968, the Court building (or the Annex as it was then known) was forced to close since it had no residents.  In 1969, the Club was fortunate enough to find a tenant for this building – the Scouts’ Association – to bring in some much needed revenue.   However the Council feared it may soon have insufficient funds to keep operating.

It would not have been easy to keep the Club going under these conditions and yet the Council ladies found a way to do it.  On 8 December 1969, Margaret Moore took part in a lengthy interview on Commercial Radio to address any negative criticism against The Helena May and to encourage new residents and subscriber members to join.

Andrew Moore has told us that his mother’s first tenure as Chair ended when the family departed from Hong Kong.  Andrew’s father worked for Swire and the family were moved in 1970 to the Bahamas for one year.  He believes his mother would have been anxious to take up the reins again on their return.  Mrs Moore would spend hours in the office of The Helena May working for the Club.  She would often bring Andrew with her and he would be free to amuse himself.  He spent a lot of time with the Club librarian, at that time Mrs Joan Conway.  Andrew credits Joan with introducing him to the pleasure of reading, which has stayed with him to this day.  Andrew also says that when he looked at the list of past Chairs he found a number of familiar names – the sons of whom he went to school in Hong Kong in the 1970s. The Helena May was always very much a part of the Hong Kong community.

Margaret Moore served two further terms as Chair – from 16 Nov 1971 to 15 Nov 1973 and later 16 Jan 1979 to 18 Sept 1981. By 1972 the focus of the Council would still be on how to increase the membership.  There were still only 136 subscriber members in 1972. During Mrs Moore’s second term of office the Council took the brave decision to invest money to turn the Court Building from dormitory style accommodation to serviced apartments.  The newly refurbished Court Building opened on 15 Nov 1973 and at this time it adopted the name of Court Building rather than Annex – since it was built on the site of the old tennis court.  To this day opening serviced apartments in the building has proved to be a very good decision.  By the time of Margaret’s third term as Chair, old ideas were being overturned.   In December 1980, a no-smoking policy was put in place for the bay window end of the Blue Room.

Margaret Moore saw The Helena May through many difficult challenges.  She certainly deserves our sincere thanks for a job well done during her years of stewardship and our very best wishes for her 90th birthday.

This may be a good place to introduce yourself and your site or include some credits.